Despite the intense limitations of the coronavirus pandemic, work on key developments around Aurora is continuing. 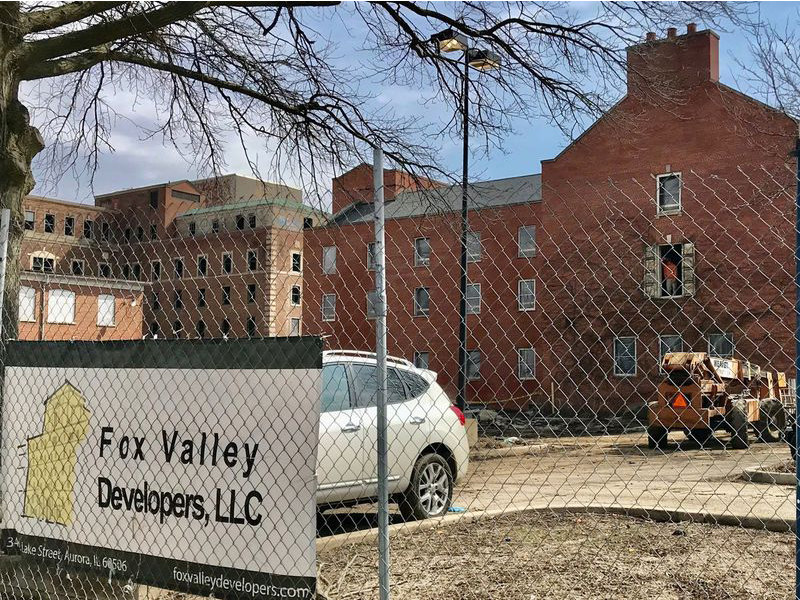 Despite the intense limitations of the coronavirus pandemic, work on key developments around Aurora is continuing.

Crews are working at both 80 S. River St., the former West Aurora School District administration building at River and Benton streets, and the old nurses building on the former Copley Hospital campus at Seminary and Lincoln avenues.

Developers at both sites – different partnerships that contain some of the same people – said they have implemented safety protocols to allow workers to continue. Those protocols include infrared temperature checks at the start of each day, observing social distancing and cleaning work areas.

“The safety of our crews is our foremost concern and we are implementing the recommendations of health officials at every project site,” said Russ Woerman, who is overseeing construction on both projects. “Our team members are grateful to have the opportunity to continue to earn a paycheck.”

The park will be developed into what currently is a segment of Seminary Avenue, which the city of Aurora is vacating and tearing up. Seminary will be a dead end street at the park, although there will be an alley behind Bardwell that goes to the next street.

It is the first part of the overall $128.5 million renovation of the former Copley campus, which is due to be completed some time in 2021. The original plan was to have East Aurora in its new building by June, or early July at the latest. Developers are still trying to meet that deadline. The school district is paying about $10 million for its part of the development, but will not make that payment until the building is finished.

The situation is a bit different at 80 S. River St., which is being remodeled into office space and apartments. The development is far enough along that developers have already begun renting some of the units, and businesses committed to moving in are making plans to do so yet this year.

Both developments are indications that much of the redevelopment in Aurora is still on track.

“Everything has been moving,” said David Dibo, Aurora’s economic development director. “The mayor is committed to moving these along.”

Still, every development is a slightly different story, with different deadlines and financing situations. Dibo admitted the economic development team, which includes people at City Hall and Invest Aurora, the non-profit development partner of the city, is working, albeit remotely, on getting the “lay of the land” for all of the development going on around town.

That includes such places as the Keystone Building, the Terminal Building, the Midwest Bank building, the former Arenkills building and the Hobbs Building, all downtown projects of various historic dimensions, timelines and financing details. The city has incentives on all those projects, and Dibo said the city would work with each on whatever needs to be done.

Martin Lyons, Aurora’s chief financial officer, said if the coronavirus crisis causes delays, either in construction or meeting financing deadlines, the city can work with the developers. He likened it to being no different than if a road project is thrown off because of heavier-than-usual rains.

“It could produce change orders,” Lyons said. “We’re going to work with all of them. If they’ve chosen to shut down for a month, we could be more relaxed.”

The city itself is facing intense financial pressure because of revenue losses caused by the pandemic. Dibo said the mayor and his staff are reworking the budget, but keeping the importance of the development projects in mind.

“The risk is still with the developer,” Lyons said. “We will work with each on a case by case basis.”